Schools in the Burry Port and Llanelli areas have been participating in a special project funded by Hub Cymru Africa and supported by Carmarthenshire County Council.  The focus of Digon teg? is to encourage pupils to think about some of the products we take for granted such as coffee and chocolate, highlight the difficulties faced by many farmers, and understand that the choices they make as consumers can have an impact.

On Wednesday 9th March, 100 pupils from Bryngwyn, Strade, Bryn Teg, Pwll, Ysgol y Castell, Pembrey, Parc-y-Tywyn, Ffwrnes, Swiss Valley, Dafen, and Old Road schools came together to attend a Fairtrade Fun event at Ysgol Glan-y-Môr.  The day got off to an excellent start with a presentation by Ugandan coffee farmer, Nimrod Wambette, who explained how this important crop is grown and harvested. Pupils were surprised to learn that it can take over three years for a newly –planted coffee tree to produce the “cherries” that eventually ripen to become coffee beans. They also learnt about the living conditions of coffee farmers and their families, and how the children had to walk many miles to collect water and to go to school, often surviving on just one meal a day. “ I felt emotional when Nimrod told us of how hard life can be there” remarked Megan, Burry Port Primary School. However with the support of Fairtrade, the farmers are ensured at least of a minimum price for the coffee they have worked so hard to produce as well as additional funding through the Fair trade premium, enabling the community to invest in projects of their choice such as a local water supply.

Pupils also got to handle a cocoa pod to learn about cocoa production in Ghana and understand the long journey and process it goes becomes a chocolate bar that can be bought in Wales.  They were amazed to find out that many children in Ghana might never have eaten chocolate as it would be too expensive for them to buy. They thoroughly enjoyed learning about Ghanaian culture through drumming and printing Adinkra symbols.

Other workshops on the day included testing bananas for their nutritional qualities in the Science Lab, comparing costs and understanding food miles with the Maths Department, and taking on the role of family members having to earn their living by making bags in the Paper bag Challenge.

At the end of a thought –provoking and enjoyable day, many children said they would now be thinking a lot more about where their food and drink comes from and now understood how choosing to buy Fairtrade or locally-produced items could really make a difference.

Many thanks to Ms Perrault, Mr Hearne, and Mr Bates in Glan-y-Môr, Ms Stephens from Bryngwyn , Emmanuel Okuni and Lyndsy Davies-Annang, Nimrod Wambette, Elen Jones, Fair Trade Wales,  and Cat Jones of Hub Cymru Africa for their part in making the day such a success.

A short film entitled “Fair enough” about the event was made by Malcolm Boorer and is available on Youtube https://www.youtube.com/watch?v=sLY1Ulhc2LE&feature=youtu.be 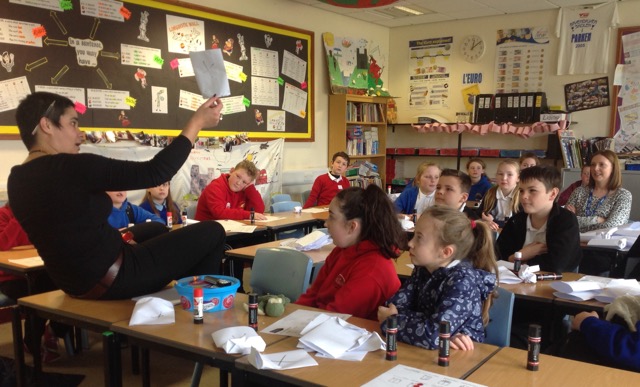